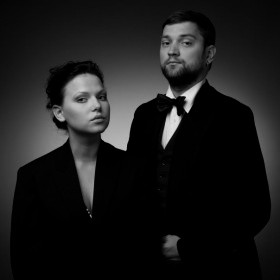 Management and bookings: butkute.evelina [at] gmail.com

Maximalism and perfectionism. Expressivity and concreteness. Echoes of electronica and lyricism of ballads. Quite a few contradictory epithets can be found while trying to translate the music of the Lithuanian duo Leon Somov & Jazzu into human language.

Having debuted with bedroom sounds back in 2005, the vocalist Jazzu and producer Leon Somov found their way into big concert halls and have never trusted a single style and confessed any musical doctrines. That’s why they keep surprising both the fans and themselves every day.

Jazzu’s signature voice can be heard in Silence Family’s signature track ‘Who’s Shot The Silence’ and the team’s breakthrough song ‘I’ll Be Gone’. Leon Somov also released his solo electronic music album on Silence Music. It was in 2009 and the album is called ‘No Batteries No Toys’.

The duo recorded their first EP ‘Offline’ in 2005. It was followed by a remix pack a year later and two more albums ‘Updated’ and ‘Score’ – in 2009 and 2010. By that time Leon Somov & Jazzu had already won an MTV Europe Music Award as Best Baltic Act and established themselves as a strong live act and travelled all around Lithuania and some European countries together with live band. Their newest studio album ‘Lees & Seas’ was released independently.